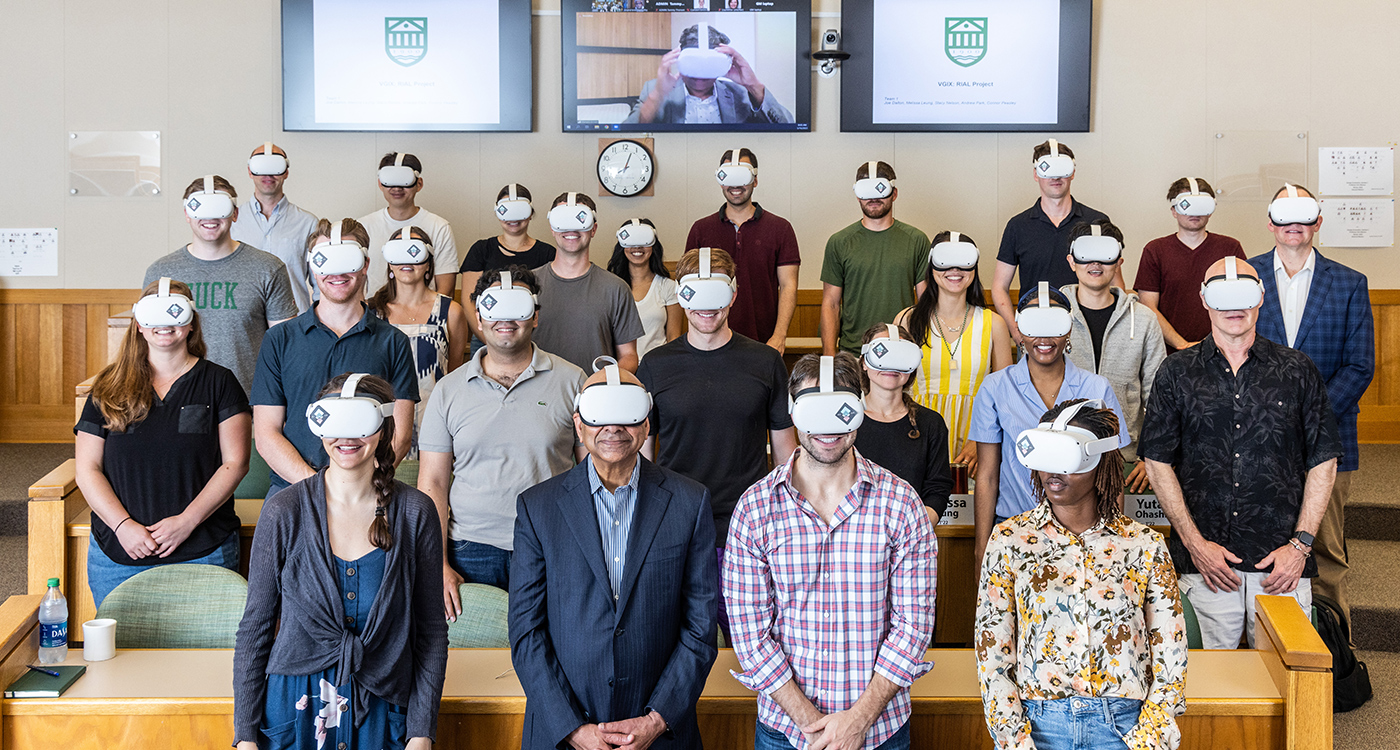 In the summer of 2021, when the COVID-19 pandemic created uncertainty about travel restrictions and Tuck’s ability to send students abroad in Global Expeditions (GIX)Vijay Govindarajan, Distinguished Professor of Management at Cox, felt there was an opportunity for innovation.

In his forty years teaching strategic innovation to MBA students and executives, he’s learned that unpredictability is a kind of gift to innovators, because it drives them to dream about what might happen next. Taking this hint from his own education, imagine Govindarajan GIX that reversed the old framework: Instead of bringing students to a foreign country, Tuck was bringing the foreign country to Hanover, using virtual reality and video technology. He pitched the idea to Dean Matthew Slaughter, and framed it as an experiment and a hedge against the assumption that typical GIXs would continue as planned in the spring of 2022.

By January of 2022, Govindarajan’s bet had paid off. The Omicron variant was spreading rapidly around the world, and the deans’ office decided to cancel all six GIX flights that were scheduled for March. Govindarajan spent six months setting up his Reverse Innovation Expedition to Tamil Nadu, southern India, believing he had 20 students. With the abolition of regular GIXs, enrollment has risen to 30. “This is the power of strategic resilience,” says Govindarajan. “We experimented with the rims, and this allowed the Tuck to pivot smoothly to the VGIX.”

Govindarajan had no intention of replacing traditional GIXs with virtual courses. He wanted to explore the potential of digital technology to augment and transform the learning experience in all areas of the Tuck MBA and Executive Education programme. “Tuck will always be a residential program,” he says. “This is the gold standard. I wanted to see if we could include some diamonds in this gold standard and make the residential experience even shinier.”

What does a Diamond MBA experience look like? For Govindarajan, it starts with the philosophy that business has an important role to play in serving the billions of low-income people in developing countries who have been mostly ignored by capitalism. He addresses this concern in his theory of reverse innovation, which posits that companies can innovate to develop markets, profit from them, and then transfer those innovations to developed markets and generate more profits. VGIX brings this idea to life by challenging students to visualize a personal health and wellness problem in South India that a business can tackle and which can eventually be transferred to the US or Europe for example.

A business problem is always embedded in a cultural context. If you don’t understand the culture and social life of these people, you won’t understand their problems with personal health and wellness.
— Vijay Govindarajan

Govindarajan knows that Reverse Innovation for South India cannot happen entirely in an office building in New York or London. “The work problem is always embedded in the cultural context,” he says. “If you don’t understand the culture and social life of these people, you won’t understand their problems with personal health and wellness.” The corollary is that Reverse Innovation is likely to be more successful if a company establishes a branch office in the southern Indian city of Chennai. With VGIX, Govindarajan is testing whether there is a hybrid approach. Namely, he created a market research educational system that blends theory, practice, and technology.

The course begins with a lesson on reverse innovation from Govindarajan. In the second session, students meet with an entrepreneur who has successfully implemented Reverse Innovation in India, who created an affordable device that detects cataracts and glaucoma, which is now on sale in the US Sessions 4-7. Through cultural, historical and social asynchronous learning, via text and video; And by watching VR videos with Oculus headphones, they get a 360-degree feel of the landscapes and communities of South India. In the last three weeks of the course, students form teams and work on hands-on learning projects. With the help of leadership and multicultural coach Martin Asser, teams find health and wellness problems that companies can solve, and then present their ideas to Indian venture capitalists. “One of the things I try to teach students is to critically examine their assumptions,” Asser says. “If your assumption is wrong and doesn’t fit with the culture and lifestyle, you lose your purpose a lot.”

As part of the course, students conducted direct client interviews with four families at the base and middle of the economic pyramid, in both rural and urban communities.

Govindarajan hails from India and is valued for its breadth and diversity. He designed the course to highlight some of this diversity by focusing on four families at the base and middle of the economic pyramid, in both rural and urban communities. Combined, these families represent more than 800 million potential consumers in India, providing the scale needed to spur for-profit innovation. The families include hunter-gatherers in Vadapatinam. construction workers in Kovilambakkam; an employee of a company in the neighborhood of Vettuvankeni for middle-income people; He is a farmer and social worker in Kovathur.

Even without a physical presence in India, we still felt an emotional connection with the people we spoke to. I learned that empathy and respect are really important to solving problems in the world. It was a life changing experience for me.
—Yuta Ohashi T’22

None of this would have been possible without Mahesh Sriram, an experiential travel expert based in Chennai. Sriram met Govindarajan about 17 years ago, while Govindarajan was working on the Tuck Global Leadership Program for Executive Education. Over the past 16 years Sriram and his team at I-India Leadership and Innovations have designed and delivered field experiences and programs in India and China for the Global Leadership Program; Together, they have over 50 years of experience working in Executive Education Tuck. Their assignment at VGIX was to create videos and VR experiences that allowed students to develop empathy for the families they would meet, and to include a narrative arc for content that gave students clues to some of the health issues family members carry.

“What we have learned is that we can make highly immersive and objective videos that take you from Hanover to India, telling you about history, geography, culture, environment, education, and the economy,” Sriram says. “And we can do this second level of stories, where the characters go through situations. Moreover, we can produce VR videos that allow the students to be invisible and just watch and listen to what is happening. This gives them the same feeling as if they were visiting that village.”

This is a massive production job, completed with I-India staff at a location in India, using traditional 2D video cameras, advanced 360-VR cameras with surround sound, and often filming in people’s homes – a time-consuming process to educate them about 360 and VR. Get their approval, then capture what they see and hear. “Virtual reality scenes are a different kind of storytelling,” Sriram says. “The story has to be in the air, and you have to pick up the right frames.” A virtual reality scene puts students on the beach in Vadapatinam, where they see and hear fishermen at work, fishmongers and families speaking in Tamil. In another scene, students can walk with locals to a corner shop in an urban neighborhood of Kovilambakkam, see houses, carts and ponds, and notice how people buy necessities like soap in small packages, because they cannot afford larger sizes.

While these unique windows into life in India have had a huge impact on students, client interviews have been truly transformative. For Yuta Ohashi T’22, who is originally from Japan, direct interaction with families was the highlight of the course. By talking to all families, learn that health and wellness problems stem from a lack of awareness, access, and affordability. He’s seen this, for example, in fishermen who have downplayed the adverse health effects of years spent in the bright sun on the ocean and told how they can’t go to the hospital for care because it’s too expensive. As you know that diabetes is a common disease in India and note that both low and middle income people suffer from it, but the disease has different pathways for each category. “There are no feeding options for the base of the pyramid,” he explains. “They have to eat what they can afford, or what the government provides. The inhabitants of the middle of the pyramid have a choice, but they like to eat cheap and unhealthy food.” Ohashi and the Action Learning team proposed the idea of ​​raising awareness and access to nutritious foods, and starting by having teams visit schools and register them for nutrition, so they could identify areas to prioritize. “Even without a physical presence in India, we still felt an emotional connection with the people we spoke to,” he says. “I learned that empathy and respect are really important to solving problems in the world. It was a life-changing experience for me.”

By empathizing and listening to people and not judging them, send the conversation in a whole new direction.
– Fatima Ba I’22

Fatima Ba enrolled at 22nd at VGIX because she wanted to spend part of her MBA experience exploring an emerging country. Ba is from Senegal and hopes to bring lessons from VGIX home one day to help solve health and wellness issues there. She appreciated how open people were in their interviews, and found it interesting that people in India and more developed countries sometimes share the same health issues, such as poor nutrition. “By empathizing, listening to people and not judging them, it sent the conversation in a whole new direction,” she says. The Action Learning team assumed that low-income Indians realize the benefits of healthy eating but cannot buy foods rich in protein and vitamins. Based on the knowledge that interviewees buy small bags from the corner store, Ba’s team suggested reproducing this form in packets of spices or drinks mixed with vitamins and proteins. “Promoting this in venture capital has been a great experience,” she says. They liked our idea because bags are something that people already use in remote areas. They also got us to think of a business model, and suggested selling the supplements to self-help groups for women, who could then promote the packages through word of mouth.”